The first time I heard the term ‘Game Theory’ was in Microeconomics Class. An interesting concept.

Now, that is the definition I got on typing Game Theory in the Google Search Bar. 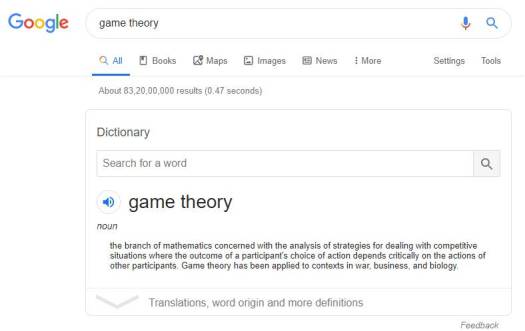 In case the image is not visible then the definition is…

‘The branch of mathematics concerned with the analysis of strategies for dealing with competitive situations where the outcome of a participant’s choice of action depends critically on the actions of other participants. Game theory has been applied to contexts in war, business, and biology.’

Hmmm, the words that appear important to me here are:

Speed of action is also significant, which is missing in the definition.

When this subject is discussed in the class, it starts with the Prisoner’s Dilemma. A crime has happened. The (suspected) criminals (two people) are arrested but on interrogation they deny their involvement. Now, the investigating officer has got a job to do. Confession has to be made. Justice has to be served. But how?

There are many other websites and books on this theory. The above mentioned links are for easy understanding for those who aren’t familiar but would like to know its application in Economics or Business Management.

But what can an investigator do in a crime scene where there has been a crime, someone is dead, the body and related stuff are carefully discarded, criminals think they have tied all loose and have the capability of doing so, have strong alibi with no strong evidence to link and no witness to speak? Criminals are free as birds, but there is someone grieving over the loss of a life yet is helpless with the investigation files closed and buried among many other cases.

If you want to understand this Game and the application of Game Theory in such a scenario, then you must watch The Invisible Guest, a Spanish crime thriller film. 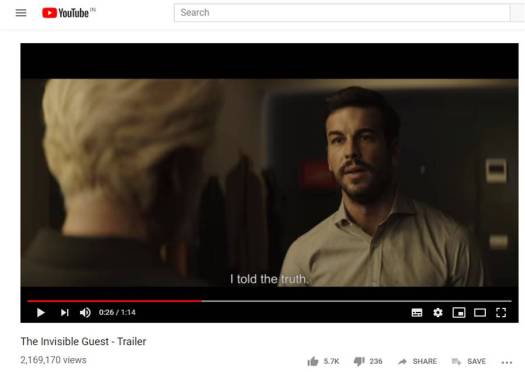 It is on Netflix with English subtitles. Badla is a Bollywood remake. I haven’t watched the Hindi Film so I cannot comment. But the original movie has a very interesting script. So I think.

If you happen to watch, do share your views as comments.
And here is the link to the trailer: https://www.youtube.com/watch?v=epCg2RbyF80

From Mumbai, SP Jain Institute of Management & Research (SPJIMR) has been ranked sixteenth (Category A -institutions that are engaged in research and teaching) amongst the top 50 Management Institutes. The NIRF website enlists all details in the Ranking Framework for Management pdf (picture below is a screen shot from the pdf on NIRF website) on the various parameters used for ranking giving a better insight into various aspects right from teaching to research to perception of each institute ranked. Such complete study and published information makes the ranking reliable unlike various rankings that are found on the website with no relevant information to support them.

I am glad that I was associated with SPJIMR and currently a part of PGPMX, IIM Indore (Mumbai Campus), and I really did like the NIRF AV presentation on the Top Ten Management Institutes for the year 2016.

I look forward towards more rankings like the best Medical Institutes and many others in the near future.